Planets in astrology have a meaning different from the modern astronomical understanding of what a planet is. Before the age of telescopes, the night sky was thought to consist of two very similar components: fixed stars, which remained motionless in relation to each other, and “wandering stars”, which moved relative to the fixed stars over the course of the year.

To the Greeks and the other earliest astronomers, this group consisted of the five planets visible to the naked eye and excluded Earth. Although strictly, the term planet applied only to those five objects, the term was latterly broadened, particularly in the Middle Ages, to include the Sun and the Moon (sometimes referred to as “Lights”), making a total of seven planets. Astrologers retain this definition today. To ancient astrologers, the planets represented the will of the gods and their direct influence upon human affairs. To modern astrologers, the planets can represent basic drives or urges in the unconscious, or energy flow regulators representing dimensions of experience. They express themselves with different qualities in the twelve signs of the zodiac and in the twelve houses. The planets are also related to each other in the form of aspects.

Modern astrologers differ on the source of the correlations between planetary positions and configurations, on the one hand, and characteristics and destinies of the natives, on the other. Hone writes that the planets exert it directly through gravitation or another, unknown influence. Others hold that the planets have no direct influence in themselves, but are mirrors of basic organising principles in the universe. In other words, the basic patterns of the universe repeat themselves everywhere, in fractal-like fashion, and “as above, so below”. Therefore, the patterns that the planets make in the sky reflect the ebb and flow of basic human impulses. The planets are also associated, especially in the Chinese tradition, with the basic forces of nature.

The Planets in Astrology 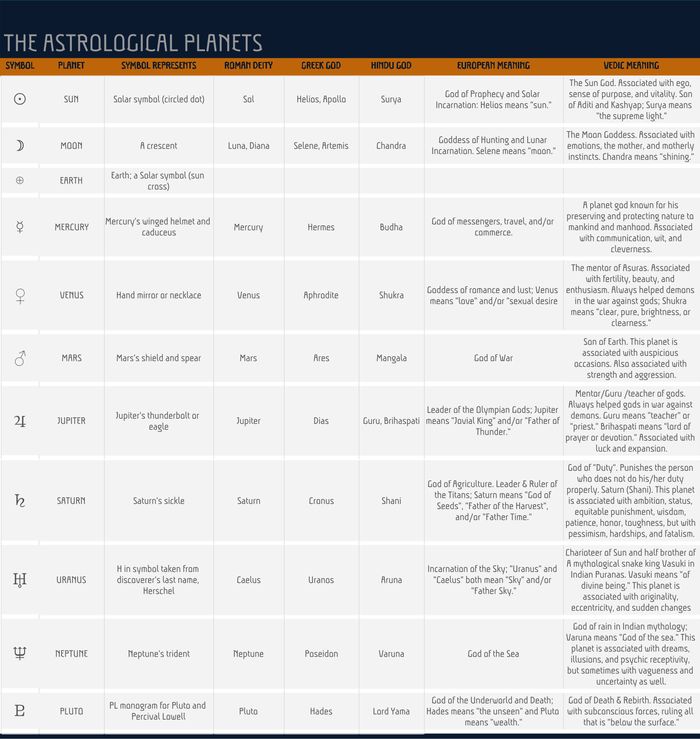